The RedmiBook 15 is Xiaomi’s entry-level notebook. It comes in two variants, the Pro model that we have for review here today and an e-Learning edition, that has a slower processor. 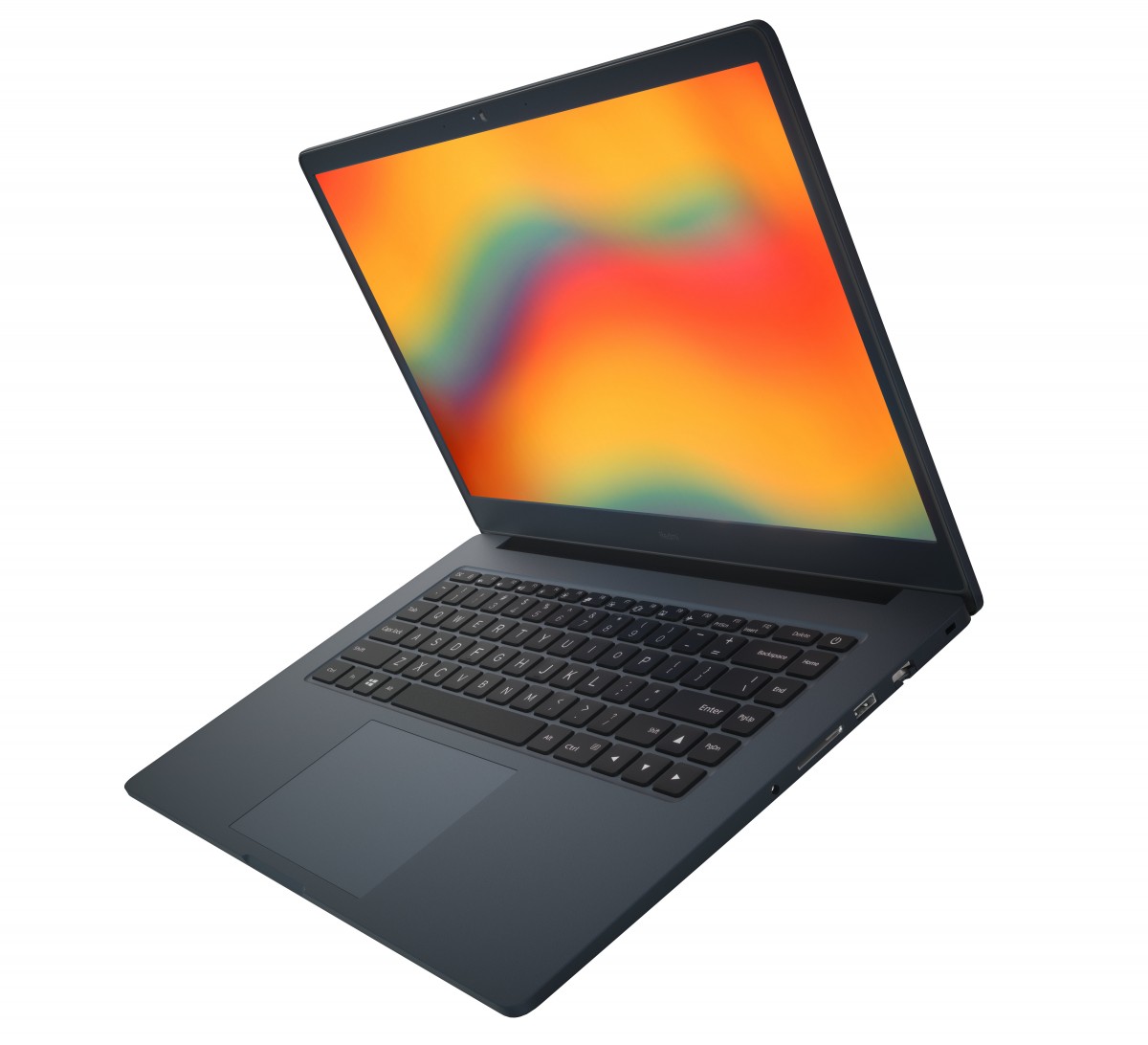 In India, the RedmiBook 15 Pro is priced at INR 49,999, which is about $685 at the time of writing. This means it sits between the truly basic laptops on the market and the more desirable models around the $1000 mark. Let’s see how well it performs.

The RedmiBook 15 Pro comes with basic packaging that includes the notebook, a 65W power brick with a standard barrel plug, power cord, and user manual.

The RedmiBook 15 Pro has a simple and minimal design. The lid has a Redmi logo, which is a departure from the previous Mi series notebooks that had no logos or markings on the lid. 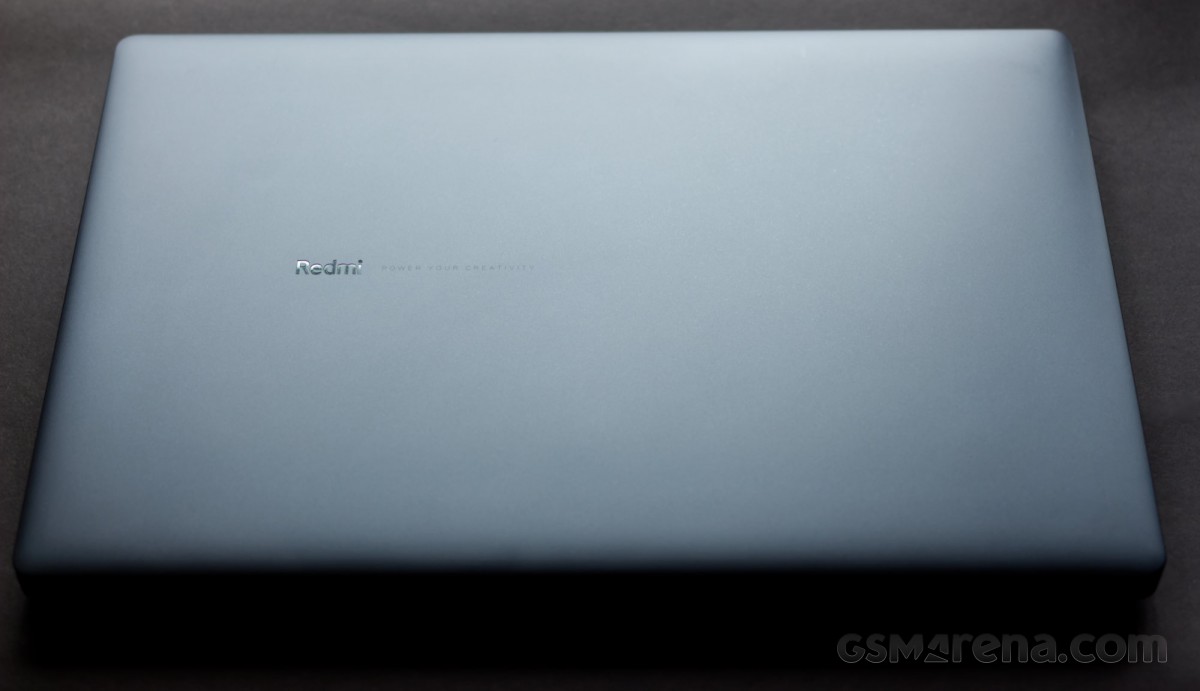 The body is made entirely out of plastic with a matte finish. This makes it very easy to cover with smudges and fingerprints. A lighter color may have made them harder to see but the RedmiBook 15 Pro comes in only one color, a dark shade of metallic blue. 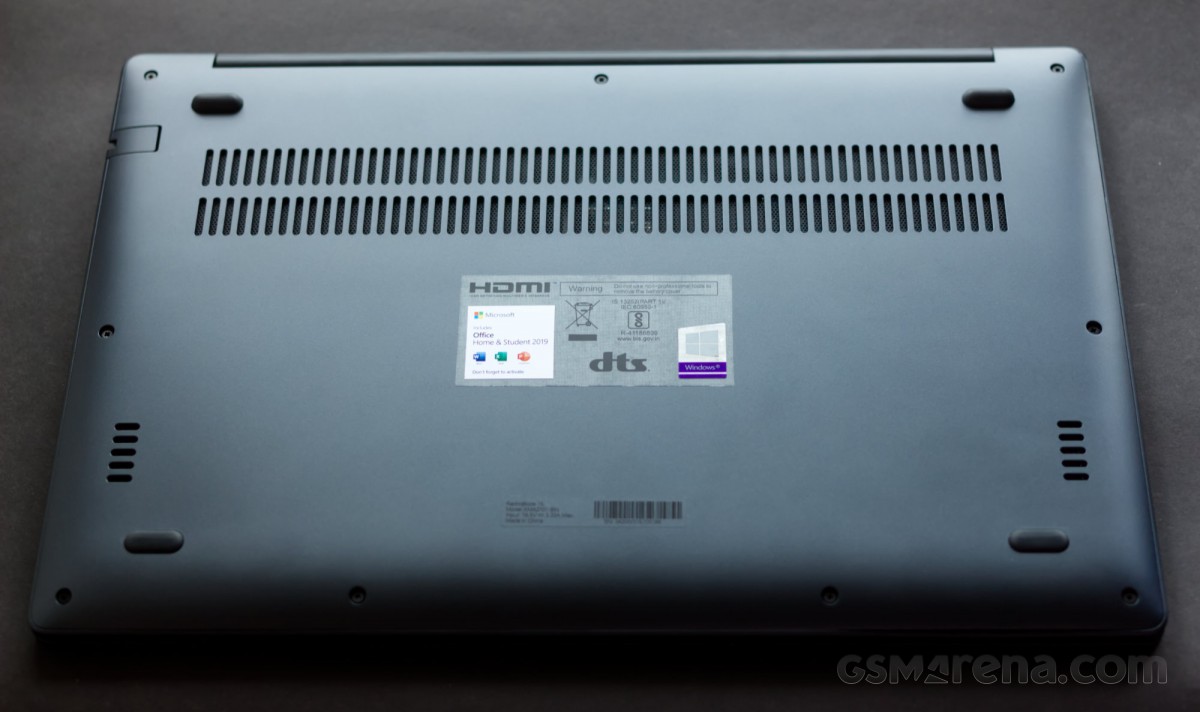 The bottom side is also relatively clean, with a single large vent for air intake and two smaller grilles at the bottom for the speakers. The air pulled in from the bottom is exhausted through a concealed grille near the hinge.

The back cover takes some effort to take off. Once you remove the nine screws the cover needs to be pried open as it’s held in place with multiple latches. This requires a spudger and may dent the plastic if not done carefully. 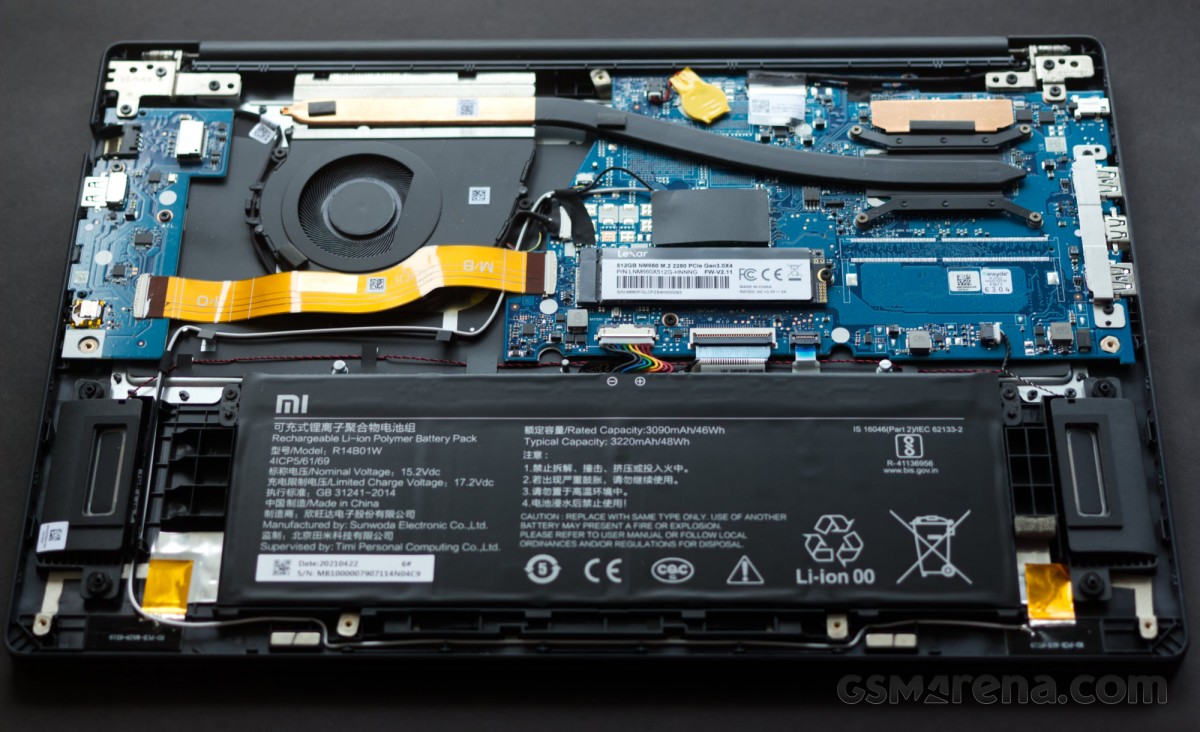 The build quality is decent and there’s no excessive flex in the chassis or the lid. The lid can be opened with one hand most of the way but it does tend to pull up the base towards the end of its arc.

Overall, the design and build quality are quite decent for the price.

The display has poor color accuracy out of the box, with a very noticeable blue tint due to the low color temperature. However, performing a hardware calibration reveals another, even larger issue. The display is only capable of covering 52% of the sRGB color space and 37% of DCI-P3. The contrast also drops further after calibration. 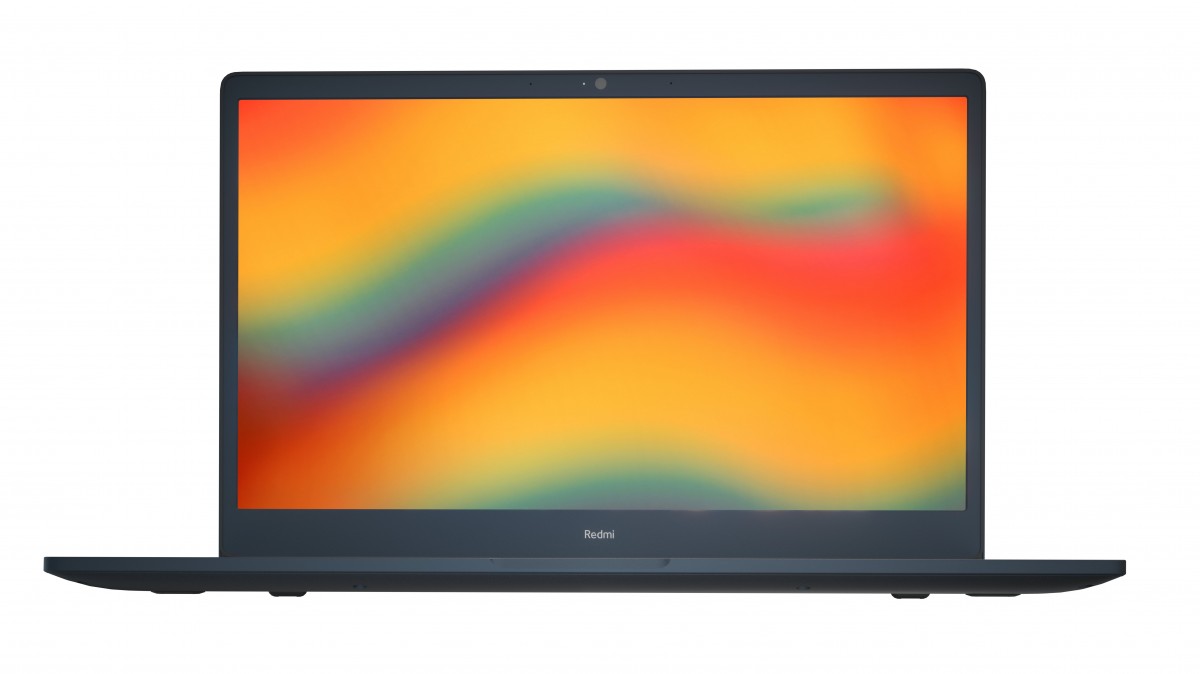 Being a TN panel, the display has poor viewing angles. There’s no angle that you can set the display to where the entire panel looks fine. This results in you constantly adjusting the display every few seconds as you focus on the upper or lower part of the screen.

The overall display performance on the RedmiBook 15 Pro is abysmal. The poor coverage of the sRGB color space means every single image, video, or web page that you see on the display lacks color definition. The only thing that isn’t affected is monochromatic documents but even there the poor viewing angles make the viewing experience miserable.

The RedmiBook 15 Pro has a spacious chiclet-style keyboard with a large plastic trackpad. 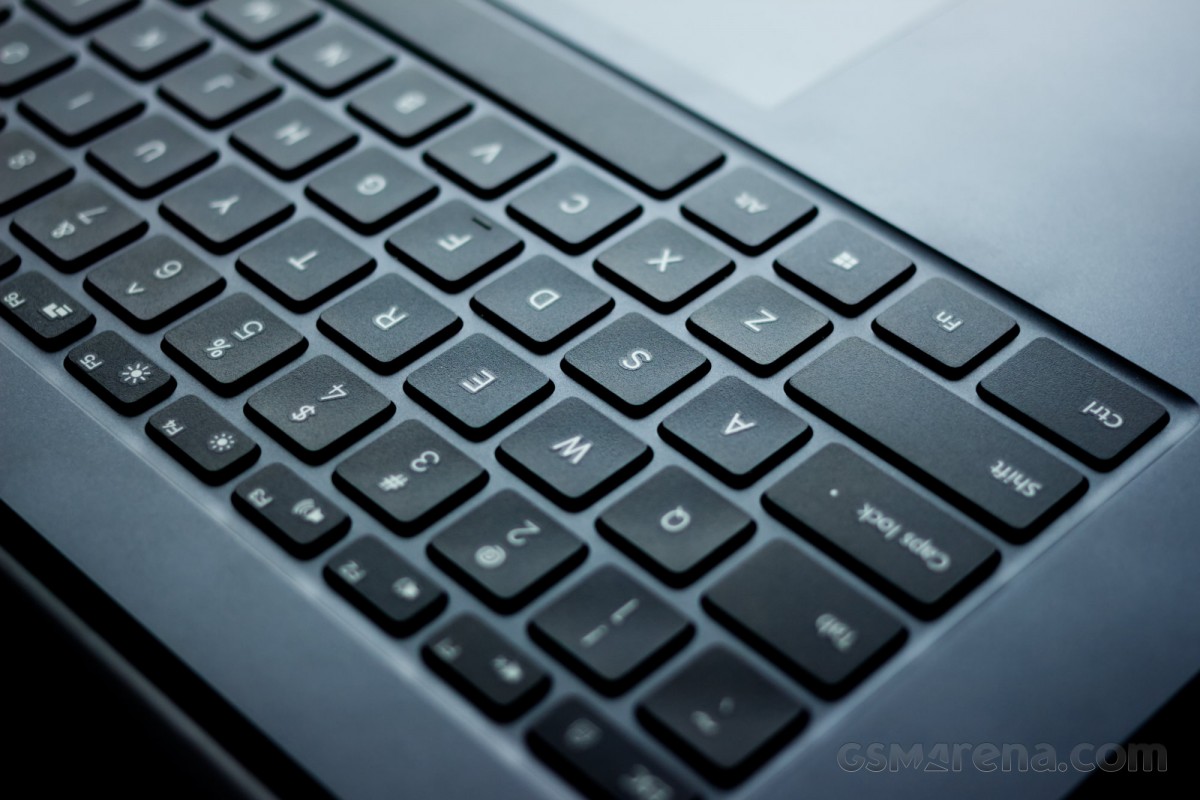 The keyboard has a standard layout with the addition of page up/down, home/end keys on the right. A lot of 15-inch laptops do try to cram in a number pad but that usually comes at the cost of comfort. The RedmiBook 15 Pro keyboard is well laid out and all the keys are well-sized and have good spacing between them.

The keys also have good travel and feedback. It doesn’t take long to get used to typing on this and the overall experience is quite comfortable and enjoyable. The only problem with the keyboard is the lack of backlighting, which makes it hard to use in the dark. 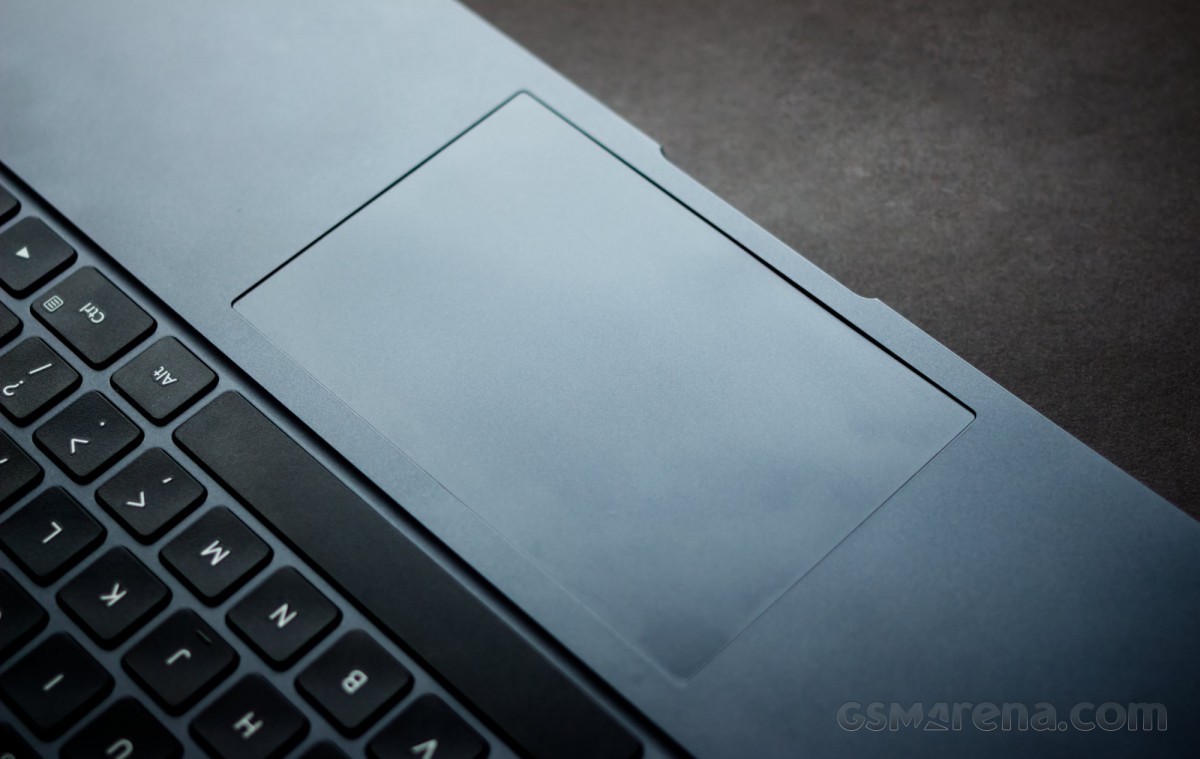 The trackpad is also quite large and easy to use. The surface doesn’t have the smooth texture of a glass trackpad, which means the additional friction makes it less pleasant to drag your fingers around it. However, it does work reliably and you can execute all the supported gestures in Windows 10 without any issues.

The RedmiBook 15 Pro has a pair of bottom-firing speakers. The speakers can get quite loud but the sound is quite tinny. It’s fine for just voices but doesn’t sound good for music or movie content. 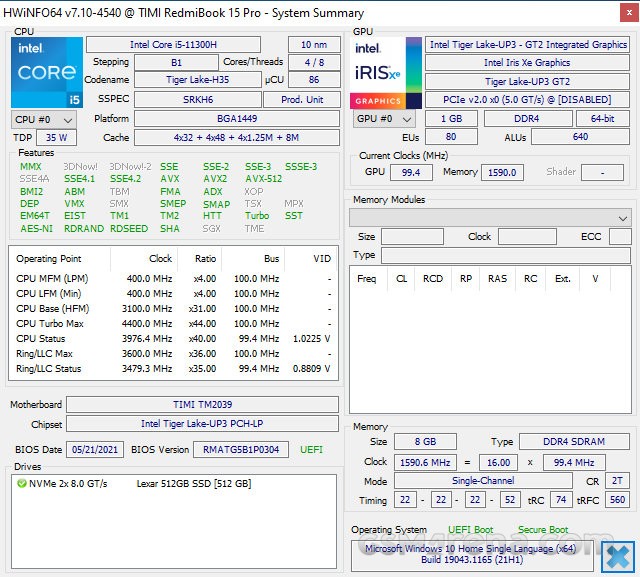 The RedmiBook 15 Pro comes in a single memory and storage configuration. You get 8GB of 3200MHz DDR4 memory in single-channel configuration and 512GB M.2 NVMe SSD.

Unfortunately, while you can just open the back panel and swap the M.2 drive with a different, higher capacity model, the RAM seems soldered to the motherboard and cannot be upgraded by the user. This means you can’t just add another stick to increase the capacity or to enable dual-channel mode for additional performance. 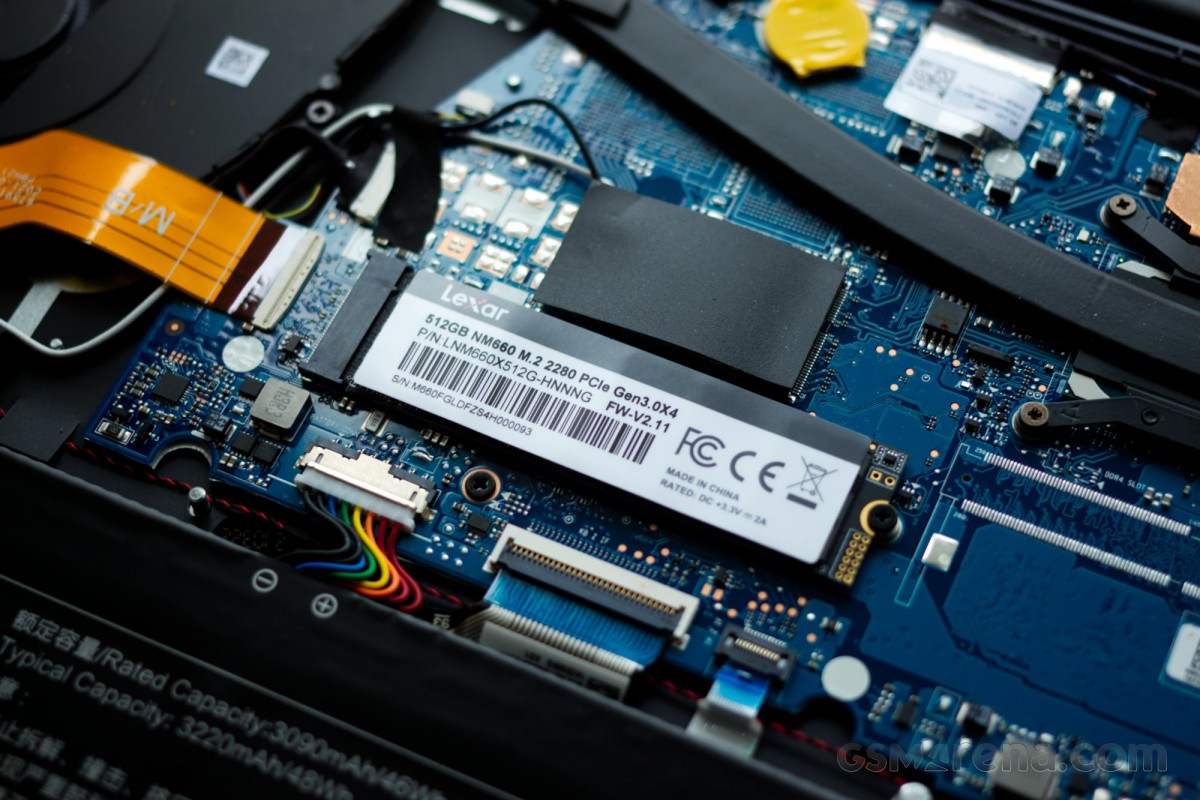 You also get a 720p webcam above the display. The image quality from the camera isn’t very good and while it may be fine for school work you may want to invest in a dedicate webcam for professional use. 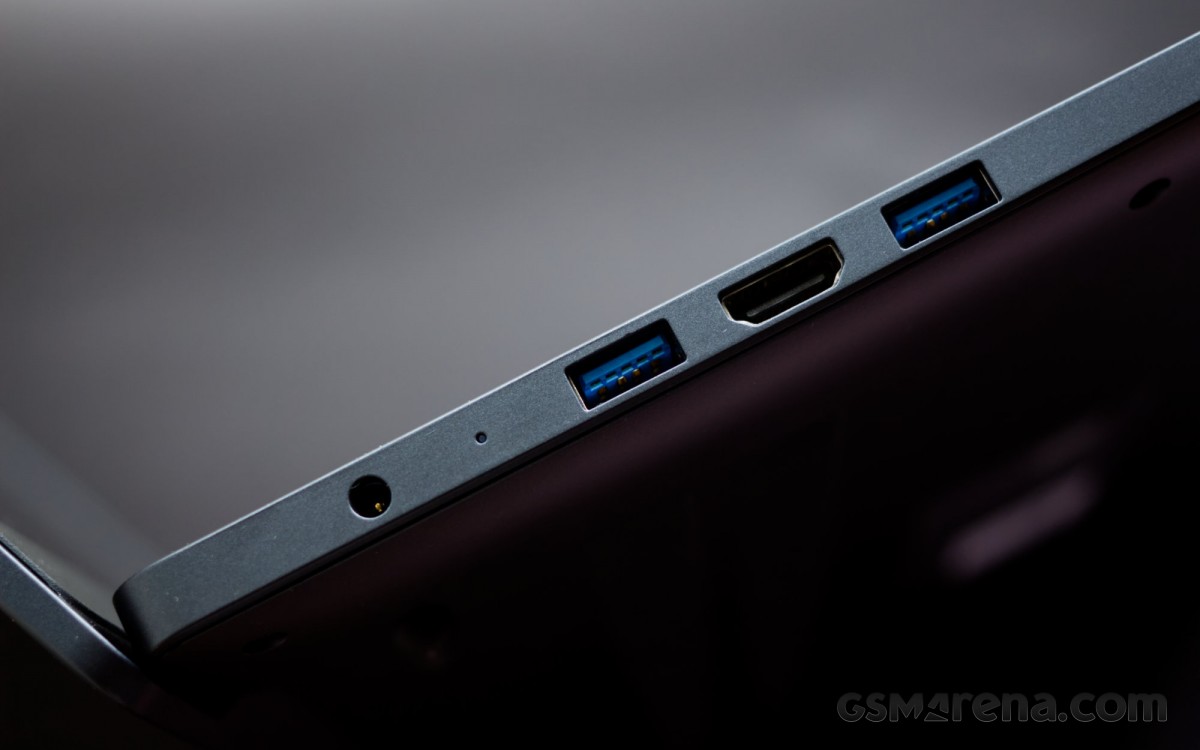 The RedmiBook 15 Pro features two USB-A 3.2 Gen 1 ports on the left side along and a single USB-A 2.0 port on the right. There aren’t any USB-C ports on this machine, which is a glaring omission in 2021, even on budget models. 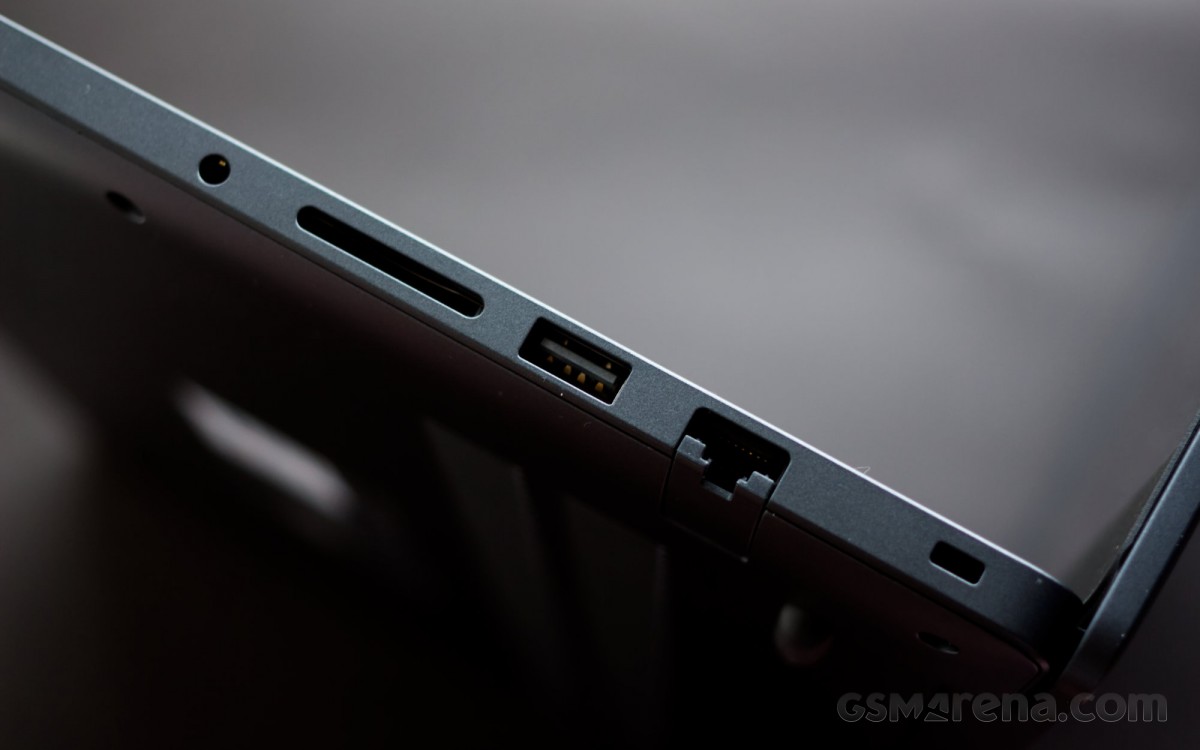 Other ports include a barrel plug for charging, a 3.5mm headphone jack, an RJ45 Gigabit Ethernet jack, and a full-size SD slot. The machine also has 2×2 dual-band Wi-Fi 802.11ac and Bluetooth 5.0.

For those who haven’t experienced Xiaomi’s notebooks, the software experience is the antithesis of their smartphones. Basically, the machine ships with an almost default Windows installation state, with only a handful of Xiaomi apps pre-installed. 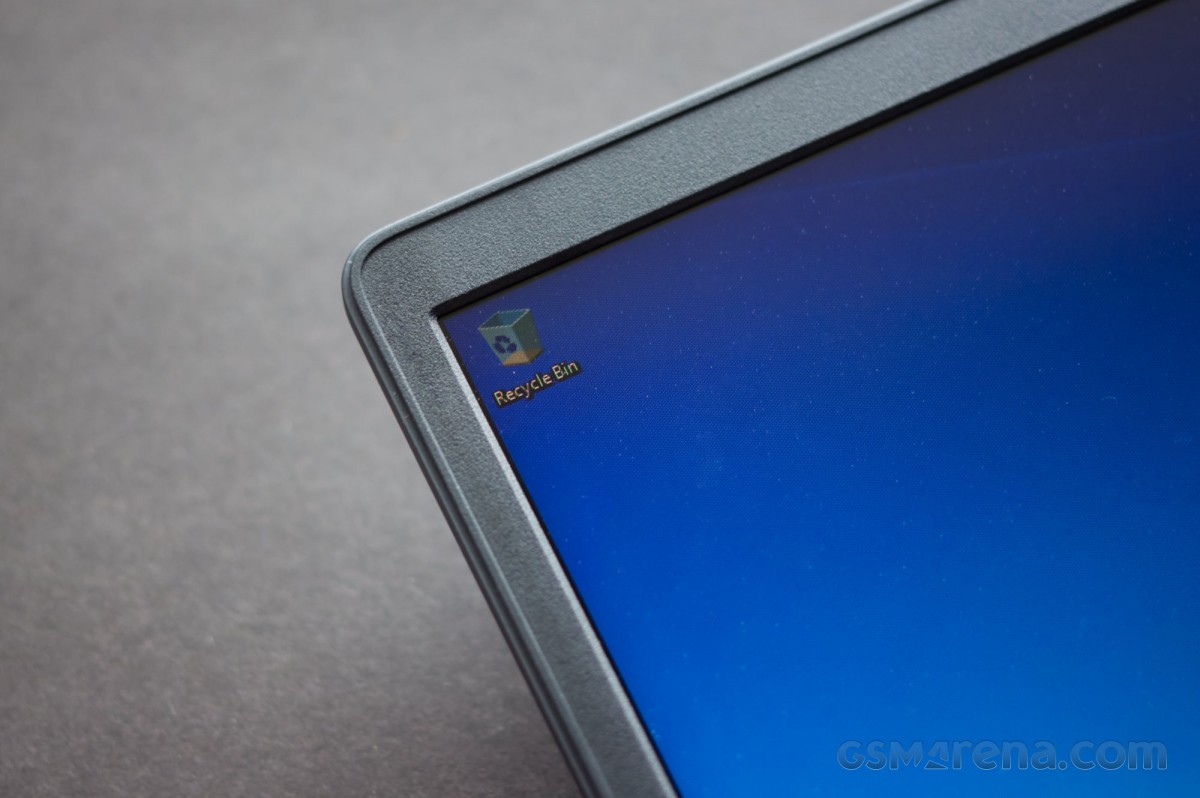 The list of pre-installed apps includes Microsoft Office, Mi Drop, Mi Service, Mi Support, Xiaomi Cloud, and DTS audio app. You can install all of them if you want and you’d have a perfectly clean installation of Windows 10.

With that being the case, there’s not much to say about the software. It pretty much feels like installing a fresh copy of Windows on a custom-built PC. Even if you don’t remove the pre-installed Xiaomi apps, they don’t really ever get in your way or bother you. In fact, most of the annoyance comes from the bloatware inherent to Windows 10 in the form of Microsoft’s pre-installed services.

As such, the RedmiBook 15 Pro gets high praise for its software experience. Well, as high as it can get on a Windows 10 PC, anyway.

The RedmiBook 15 Pro offers good performance for home, office, or school use. The quad-core Intel processor is powerful enough to handle web browsing, office documents, and even 4K video playback with consummate ease.

The 8GB memory is usually adequate for casual web browsing, office or school work, or for watching media content. Just using Microsoft Edge, the machine was able to juggle a handful of tabs and a few open applications reasonably well. However, if you need to do anything more than that then know that there is no way to upgrade your memory on this machine. 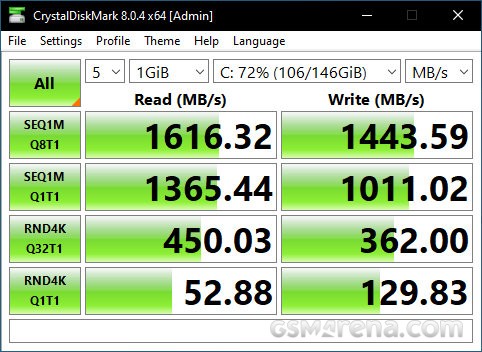 The 512GB Lexar M.2 SSD also performed well. A fast SSD contributes a lot to the performance, making application launches and booting up from sleep significantly faster, and that’s exactly what we see here. The 512GB capacity should be adequate for most users and you can always supplement it with an external drive. Or, as mentioned before, you can swap out the included drive with a larger, faster model of your own.

Gaming performance is poor, as could be expected from the lack of a discrete GPU. The integrated Iris Xe graphics can handle very old games, ultra-lightweight competitive titles, and basic 2D titles but throw anything more at it and it just completely buckles under stress. Even in a relatively simple title like Genshin Impact, the RedmiBook 15 Pro struggles to maintain a consistent 30fps at the lowest settings without consistent hitching and massive frame time spikes.

Cooling on the RedmiBook 15 Pro is okay. For general usages like web browsing and editing documents, the computer remains cool and quiet most of the time. However, if you have CPU demanding workload then the temperatures can get quite high.

This is likely due to the relatively small heat sink design and a fan curve that is set more for noise than performance. Even under load, the fan noise isn’t loud or obtrusive but the downside of this is that temperatures can exceed 70°C regularly, even going into the upper 90s and then throttling while the fan is still relatively quiet.

Since the machine is so large, the heat doesn’t quite reach areas that you’d normally touch. This means that the area below the keyboard and most of the backside remain relatively cool to the touch. 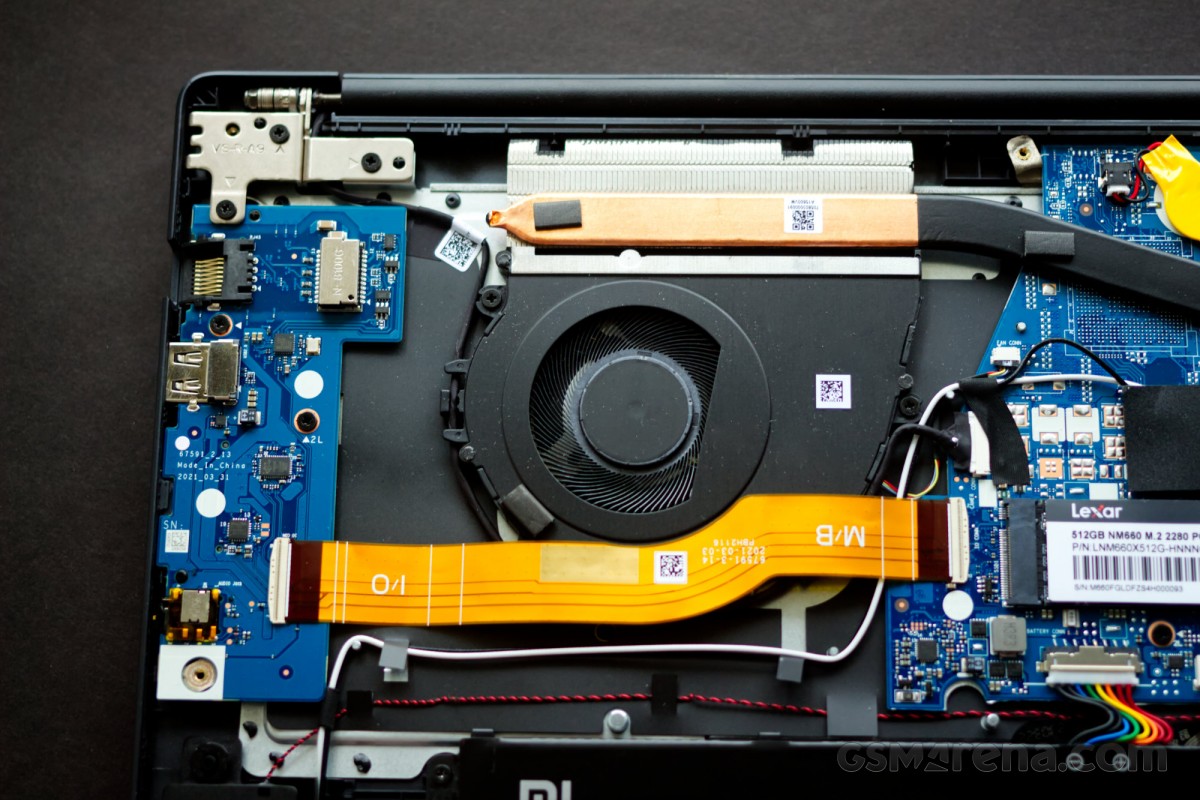 In terms of connectivity, the Wi-Fi worked reliably when it was connected. However, once the machine goes to sleep for a while, it does take a remarkably long time for the Wi-Fi to reconnect, usually upwards of 30 seconds. And there’s not much you can do to speed it up.

The RedmiBook 15 Pro has a 3220mAh/48Wh battery, which is fairly typical for this price class, even though it looks a bit small in the large 15-inch body.

Xiaomi claims a battery life of around 10 hours. In my testing, with the display brightness set to around 70%, I got around six hours of use when set to the prefer performance mode.

The RedmiBook 15 Pro is a reasonably well-spec’d and well-performing machine. The design is simple enough for a school or work machine without being too boring or flashy. The build quality is decent and it’s not too heavy to carry around despite its size.

The performance is also quite good. It’s unfortunate that the machine is stuck with 8GB RAM for life but as long as your usage doesn’t exceed that limit then you’ll be quite happy with how the machine performs for home, office, or school use. 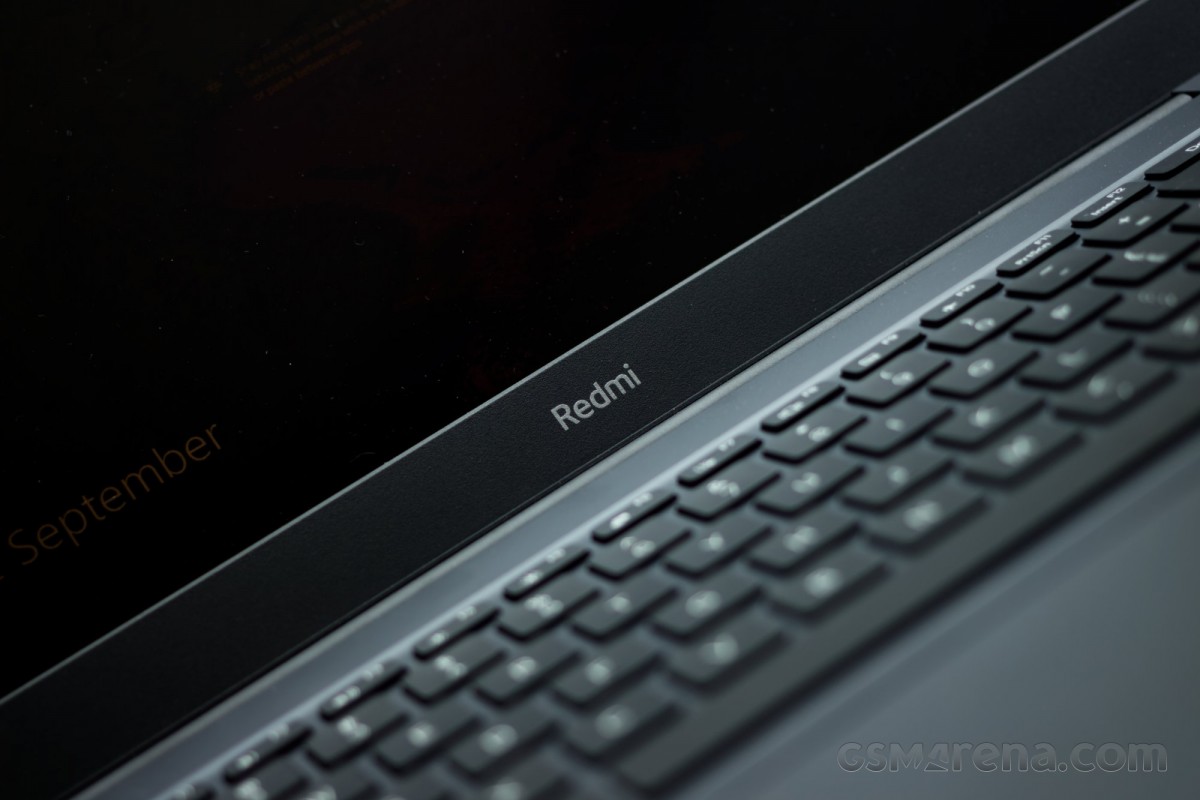 There are a few drawbacks, however, such as the lack of USB-C ports, lack of keyboard backlighting, and the Wi-Fi that takes an awful lot of time to reconnect after waking up from sleep.

But nothing sets the RedmiBook 15 Pro back like the truly dreadful display that Xiaomi decided to put on this machine. Poor viewing angles, poor color performance, poor contrast, low brightness, there’s basically nothing that this screen gets right. Even just working on documents or browsing the web is hard on the eyes. It was only after connecting to an external monitor was the machine usable.

At the price, there are plenty of notebooks that come with a decent display in this price range, including the new Realme Book. While that machine isn’t as powerful as the RedmiBook 15 Pro, it may still be a worthwhile compromise for getting the vastly superior display.

In the end, even though the RedmiBook 15 Pro is a pretty decent budget notebook, the poor display quality absolutely kills its chances of getting any recommendation.