Last year, Samsung released the Galaxy S20 FE model, commonly known as the cheap version of the Galaxy S20 series. This was the first time that the company was releasing the FE (Fan Edition) model. This model comes with the same hardcore configuration as the top flagship but at a lower price. Thus, it has been favored by many consumers. After the Samsung Galaxy S21 series hit the market, many netizens also began to look forward to the arrival of the new Samsung Galaxy S21 FE. As of now, most of the details of this smartphone are already in the public domain. Now, the latest report regarding this device reveals the launch date of this smartphone. 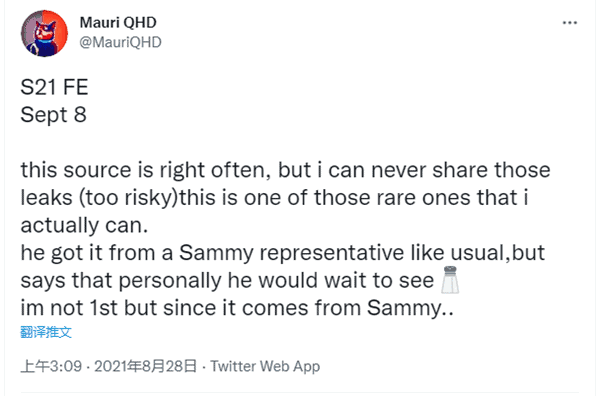 According to the report, the company may unveil the Samsung Galaxy S21 FE as early as next week. Specifically, the report shows that the possible launch date for this smartphone is September 8 (next Wednesday). It is worth noting that this device has appeared on Google Play before and has been certified in many countries. There have also been official posters from Samsung implying that the official launch of this device is close.

Update: A recent report from @jon_prosser claims that the Samsung Galaxy S21 FE will not arrive on September 8th. According to him, this smartphone will arrive in late October 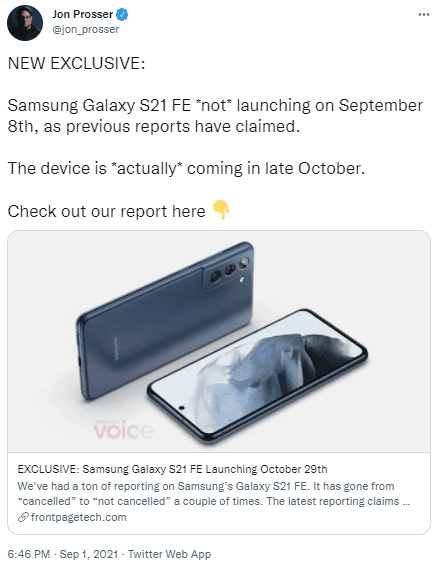 In terms of design, the Samsung Galaxy S21 FE continues the overall design of the Samsung Galaxy S21 series. Furthermore, this smartphone comes with a center punch-hole display and there is a significant upgrade to the screen-to-body ratio. The bezels on all sides appear to be equal, this smartphone will use a “quad bezeless design”. Although we consider it to be a “quad bezeless design”, it is not entirely bezeless but the bezels are very narrow. This design will allow the display to offer an immersive user experience.