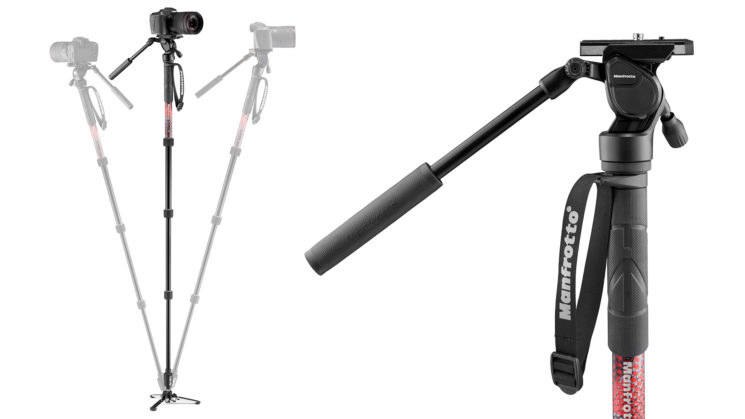 Manfrotto has today announced their new Manfrotto Element MII Fluid Video Monopod. They say it’s the lightest video monopod on the market, coming in at a mere 1kg (or 670g for the headless version), and includes three feet at the bottom to help it stand when you need to as has the option of a built-in fluid drag head for smooth tilting and panning.

It’s available in two different options. First is the whole kit with the built-in fluid head but you can also buy the monopod sans head with a 3/8-16″ thread on top allowing you to attach your tilt (or other) head of choice.

The headless Manfrotto Element MII Video Monopod comes in at $89.99 and it’s essentially the same 4-section monopod as the standard Manfrotto Element MII Monopod for photographers, except that it has those three feet on the bottom, allowing you to stand it up when not in use (at your own risk) or to provide a little more support when you want it to stay upright. 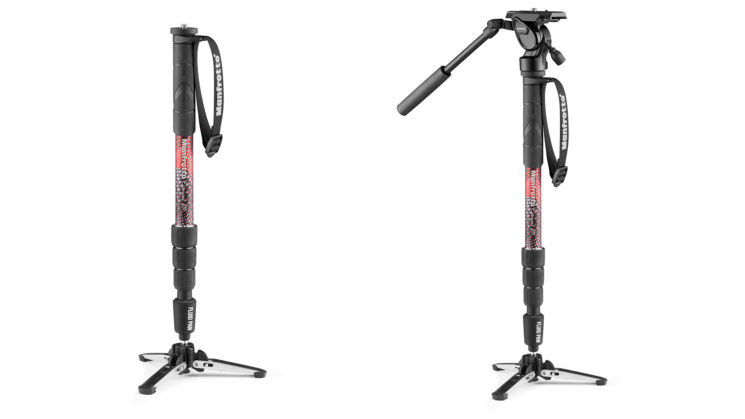 The folded length of the Element MII Video is a little longer than the standard Element MII coming in at 50.5cm instead of 42.9cm and the maximum height isn’t quite as tall, being 128cm instead of 159cm. Depending on what head you’re using, though, that will raise it up some more. The headless monopod weighs 670g and handles loads up to 16kg. Hypothetically, anyway. You have to subtract the weight of your head from this and this is also max load, not safe load.

The Manfrotto Element MII Video Monopod with Live Fluid Head (to give it its full title) features a non-removable built-in fluid video head. This one packs away a little larger at 60.5cm but also extends a little taller, too, coming up to 137.7cm. This one offers a load capacity of up to 4kg, and this appears to be the safe load limit so it should handle pretty much any rig you’d consider using with a monopod of this size and stature.

Being so lightweight, it’s designed as a travel monopod, so you’re not going to be putting huge RED and ARRI rigs on this thing. But a mirrorless in a cage with a field monitor for run and gun stuff? Sure, why not? This looks like it could be ideally suited to that kind of thing. Personally, though, I might be inclined to get the headless version along with the Befree Live Fluid Head and the 234RC tilt head, then you use whichever your needs (and time constraints) are at the time. The 234RC tilt head is particularly useful if you’re switching a lot between video on the monopod and handheld stills.

The Manfrotto Element MII Video Monopod is available to pre-order now for $169.99 with the built-in fluid video head or $89.99 as a headless monopod with a 3/8-16″ socket. They’re expected to start shipping in the coming weeks.