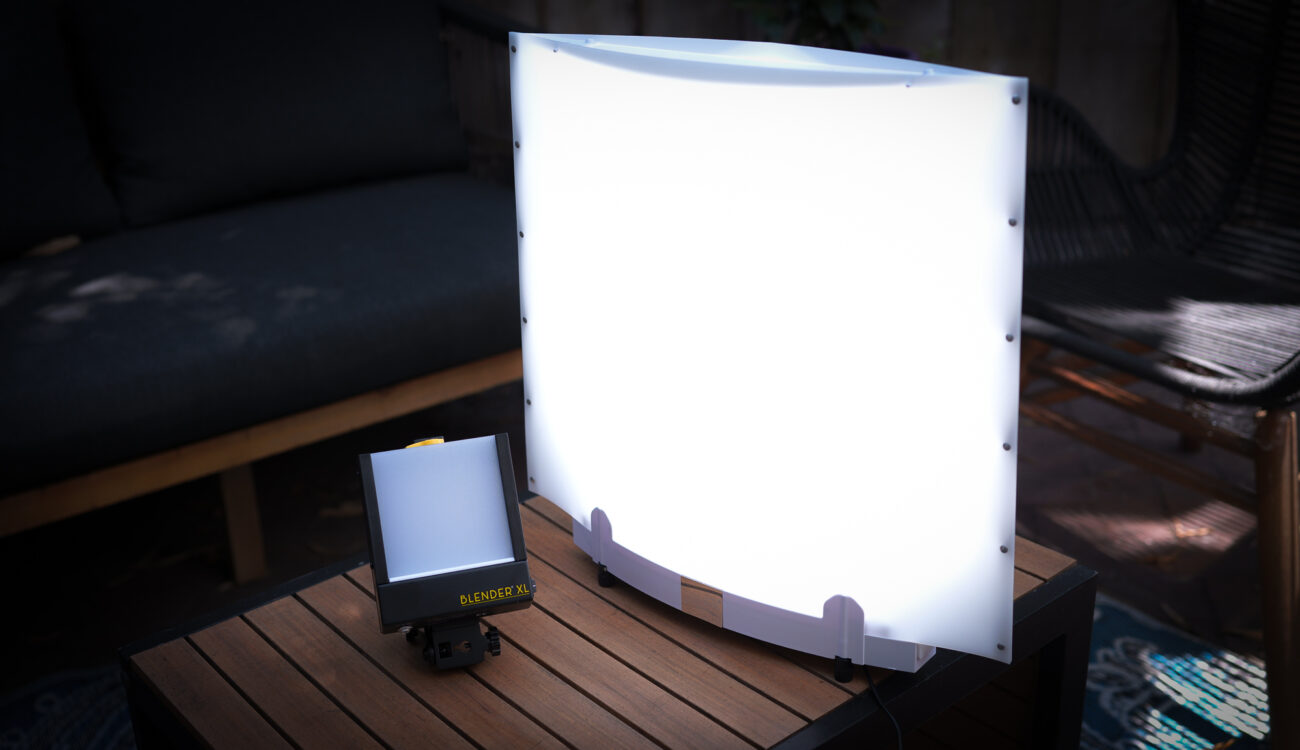 The very first lighting kit I purchased was a set of hot Tungsten fixtures from Lowel over a decade ago. Even then, these lights departed from the typical Fresnel style grain most often used in Tungsten lights. Today, Lowel continues to exhibit this independent spirit with their two unique LED lights – the Blender XL and the Ego LED.

Let’s go in alphabetical order (why not!) and start with the Blender XL first and move on to the Ego LED. You may have heard the name Lowel Blender before, but it used to be simply called Blender without the XL in the name.

The original and now discontinued Lowel Blender has been replaced by the newer $379.00 Blender XL. Is the new Blender deserving of the “XL” title? Let’s find out.

The Blender XL aluminum and steel design feels like it was intended for news gathering on-camera ENG-style applications. The elongated boxy exterior certainly speaks to that use. Compared with modern cinema cameras (for example, the Canon C-series or Sony F-series), the Blender XL seems a little large to live on-camera.

However, a traditional broadcast-news ENG camera would take the weight just fine and wouldn’t feel off-balance. The fact the Blender XL ships with a D-Tap power cable also lends credence to the idea that on-camera was a use case Lowel had in mind.

Lowel also markets the Blender XL for interviews and as a standalone fixture for pops of light as needed. The 45-degree narrow beam angle is very directional, giving the red-carpet spotlight feel if fired at your subject. The included filters are effective at softening the beam to lessen any spottiness. For comparison, the latest generation of Litepanels Astra 6x 1×1 panels have a 46-degree beam angle which also gives that spotlight feel.

The Blender XL ships with a diffusion panel that slides easily into place and uses a click-in system, that I like and haven’t yet seen by manufacturers. The diffusion filter is rock solid and isn’t going anywhere. From what I can tell, Lowel doesn’t provide any other accessories for the Blender XL beyond the D-Tap cable, diffusion panel, and power cable that ship with the light itself. I reached out to Lowel about additional accessories and they mentioned that Silver and Reflective umbrellas will soon be made available for the Blender XL.

Keep in mind when comparing fixtures that beam angle can heavily influence output. I grabbed a few measurements on my Sekonic C-700U Spectrometer (now updated with the C-800U) to see how accurately the Blender XL handles color temp measured in kelvin and output (lx) from a distance of 3 ft. Here are my readings with a target of 5600K and output set to 100 %. I had no accessories attached for any of these readings.

A reading of 6006K with a target of 5600K is slightly off from the 56K we normally like to see, but this is correctable with gels. Also, keep in mind that a 400K difference is tough to see on camera unless you have a different fixture set to 56K and pointed at your subject. For comparison, here is a measurement from the Blender XL with a target of 3200K – with output set to 100%.

According to my readings, the Blender XL also had a CRI average of 97, which is excellent.

Note: Since neither the Blender XL nor the Ego has a digital screen denoting exact Kelvin temperature, it was a little tricky to tell if I hit the correct kelvin points on the knob to allow for testing. So, for Daylight, I went to the far daylight end of the knob range, and the same is true for the Tungsten end of the knob. If the Daylight range ends at 6000K, then the daylight reading could be spot-on, but this is tough to conclude since I can’t find any literature showing the advertised kelvin range for the Blender XL.

For build quality, the Blender XL gets top marks and really seems like an indestructible addition to a lighting kit. And, given the size and output, it also seems like an excellent candidate for a travel 3-light kit that, with minimal padding in a Pelican-style case, could be safely checked into the cargo hold of a plane. I would love to see Lowel offer the Blender XL in a 3-light kit like the previous Blender light and after asking Lowel they sent this image along:

I’m told the 3-light kit will be available in late September 2021.

Given there are only two knobs, one to control daylight brightness and one to control tungsten brightness, this is a really easy light to use. What I would like to see are more compatible accessories added to the Blender ecosystem. Some different types of diffusion and perhaps some different colors, along with a barn door attachment for additional beam control, would be helpful. In terms of other mounting accessories, it would be nice to be able to quickly build a grid of a few Blender XL’s mounted together for increased output or even an interesting grid-style practical in the background of a shot.

In-light colors, effects, and digital gels remain all the rage these days. Still, it’s worth pointing out that unless your shoots require widely different colors bouncing everywhere, a trusty well-built bi-color light remains a worthwhile investment. As for me, most of my work remains firmly in the daylight and tungsten parts of the kelvin spectrum, and the Blender XL handles that world well.

The Bi-Color Ego LED looks a little like a sail of a ship taking on a full gust of wind and feels a bit, dare I say, stylish in an ultra-modern interior design sort of way. Lowel promotes the Ego as an “everyday desk lamp,” but in my opinion, it feels 30% too large for that application. Next to the 16-inch MacBook on my desk, the Ego dwarfs the laptop.

As to the Ego’s output, I particularly love how soft and flattering it is on faces and products. With a Kelvin range of 2700K-6300K, it feels like a mini table-top book light. Much has been written about how to create a full-sized book light, and I won’t delve into it here other than to suggest this how-to video from Aputure if you want to execute one yourself.

Note: For the Ego LED, I decided not to do Spectrometer readings. This was not because I thought the light would perform poorly but because of the non-specific Kelvin wheel. Also, the Kelvin range starting at 2700K and ending at 6300K means it’s a little tricky to target the more common Kelvin temperatures I usually work with. I did test for CRI and received an average CRI of 94 – not as good as the Blender XL, but still excellent.

The design of the Ego LED appears to be loosely based on a previous fluorescent Ego generation that had a more triangular exterior. A rear black panel means most of the output will emanate from the 17-inch front panel covered by plastic non-changeable diffusion.

Who is the Ego LED for?

At CineD, we spend a lot of time talking about use cases. Who is this light for? At what task or tasks does it perform best? Often a fixture that excels in a variety of circumstances is preferred, but in some cases, the opposite is the truth. In my opinion, the Ego LED has a narrow focus and works best for product or as a key light for a live stream or closeup shot. It just isn’t quite large enough for an interview key light in a medium to large space, and it clearly isn’t designed to be mounted directly on C-stands or light stands (a single ¼” -20 screw is on the base). The Ego LED also includes a 3/8 adapter for additional mounting options.

The price tag of $149.00 is particularly appealing for those looking to up their streaming game in this at-home pandemic world we find ourselves. Again, I have to come back to how soft and flattering this light is. If I had my pick of lights to point at myself during a live stream or online panel discussion, I would bypass a ring light and choose the Ego because of the handy built-in table stands and the quality of light.

Since my college days, I’ve had a soft spot for Lowel, and the brand living under the Tiffen umbrella speaks to a continuing commitment to design innovation. I say that because both the Ego and Blender XL feel different from the lights I work with on a day-to-day basis, and I appreciate that. Sometimes change is good as the lighting segment, in particular, feels locked into similar feature lists and form factors more and more these days.

The Blender XL feels like a valuable tool for news gatherers or broadcast professionals looking for a solid on-camera light, and the Ego LED is perfectly tailored for the work-from-home zoom crowd or professional streamers looking for a solid key light. These lights are both throwbacks in the sense that they don’t present a vast array of colors or effects, but they do their job and do it well.

Guys, what do you think about these lights? What lights do you use for streaming and will you consider purchasing one of these? Let us know in the comments below!

7 trends in online payments to watch for in ecommerce