Home » iPhone 13 series – specs and pricing have been revealed
Mobile

iPhone 13 series – specs and pricing have been revealed


We’ve reached September, and as usual, Apple is gearing up to make its biggest move of the year. The iPhone launch is returning to its September window, even though almost hitting October. The new iPhone 13 series is rumored to go official on September 24, but the pre-orders should start a little bit earlier. According to insiders, the company will bring the iPhone 13 in four models, just like the last year. So, despite the previous rumors, the mini variant is coming back in an iPhone 13 make up. Today, the folks at @theapplehub Instagram account have revealed the complete specs sheet for all the upcoming smartphones. So without further ado, let’s see what the new iPhone 13 series is capable of. 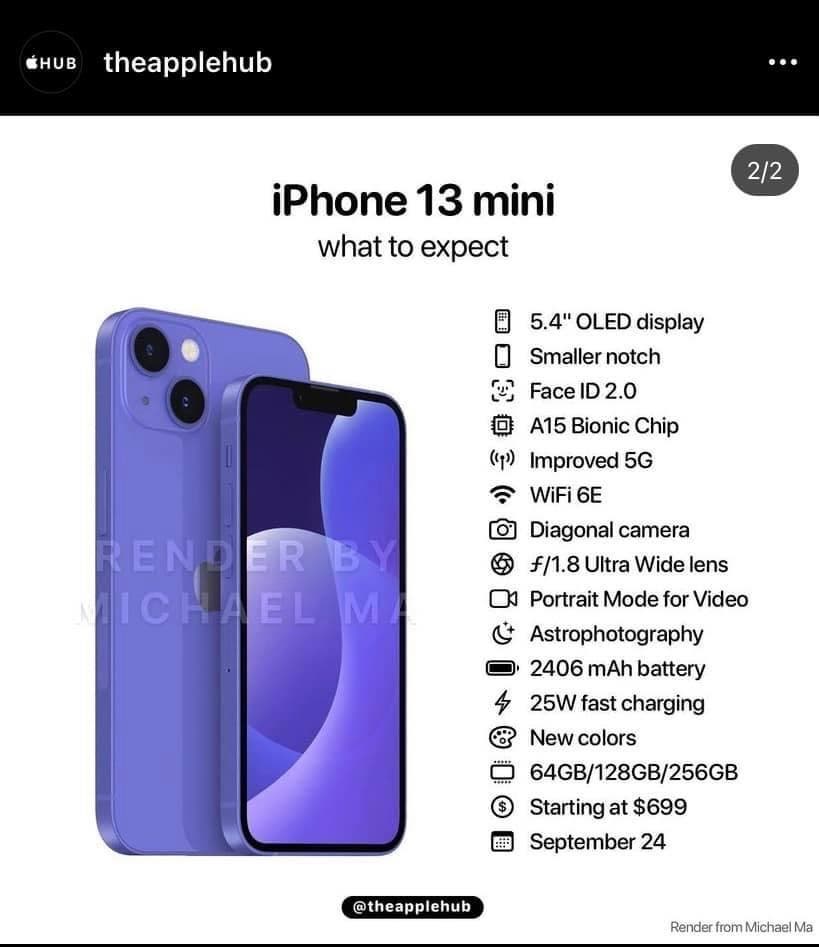 Apple is back with the smallest iPhone of the family. Despite the rumors about a “mixed reception” for the iPhone 13 mini, the results probably satisfied Apple, therefore it is bringing a new iPhone 13 mini model. As per the leaked specs sheet, the newer model will come with a 5.4-inch OLED screen, but the resolution is a mystery. We expect it to be around the HD+ territory and Apple will give a fancy name for it. The new model will also come with a Smaller Notch that boasts Face ID 2.0 technology.

Under the hood, the iPhone 13 mini-packs the Apple A14 Bionic chip with improved 5G connectivity and Wi-Fi 6E support. The new iPhone has an unusual “diagonal camera” arrangement with a primary module and an ultrawide camera with an f/1.8 aperture. The setup will also support portrait mode on videos and Astrophotography.

The iPhone 13 mini will draw its powers from a modest 2,406 mAh battery. Thankfully, there is 25 W charging which should fill this battery in less than an hour. The new model will come with new colors and there will be variants with 64 GB, 128 GB, and 256 GB of Internal Storage. 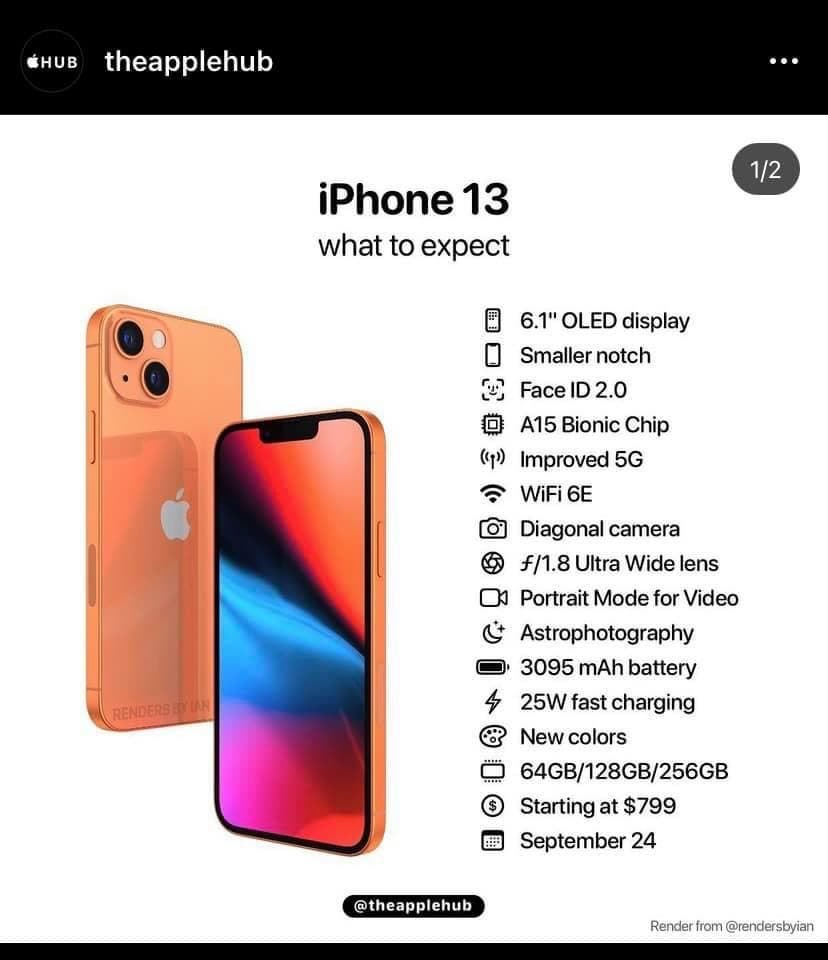 The vanilla iPhone model will also bring significant upgrades including the smaller notch. There will be a 6.1-inch OLED display with the very same Face ID 2.0 support. Under the hood, we also have the Apple A15 Bionic chip, better 5G, and Wi-Fi 6E support. There is also a dual-camera setup with the very same arrangement and features as the 13 mini.

Due to its larger body, the device has a 3,095 mAh battery. This surely isn’t impressive for those on the Android side of the coin who are used to 4,000 mAh batteries and beyond. Anyway, the new model also has 25W fast charging. 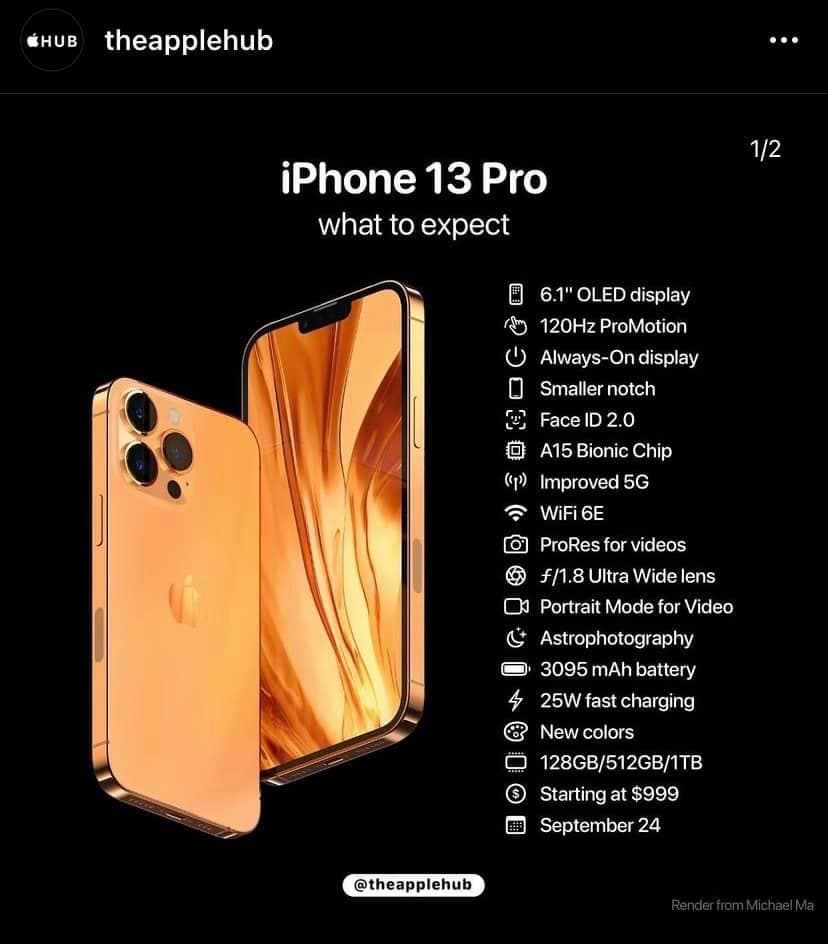 The iPhone 13 Pro has the very same 6.1-inch OLED screen, but we assume it gets a higher resolution. This is the first model with a 120 Hz refresh rate and Apple’s Always-On Display feature. The device also has a smaller notch and an improved facial recognition feature.

Under the hood, the iPhone 13 Pro has the very same Apple A15 Bionic chip. The improvements in connectivity are the same as the other models. In the camera department, we have a third camera module. There is a ProRes feature for videos, an ultra-wide camera, and Astrophotography support.

The iPhone 13 Pro gets the same 3,095 mAh battery with 25 W fast-charging and will arrive in new colorways.

The Pro model starts with 128 GB of Storage and is also available in options with 512 GB and a whopping 1 TB of Storage. This “premium” variant starts at $999. 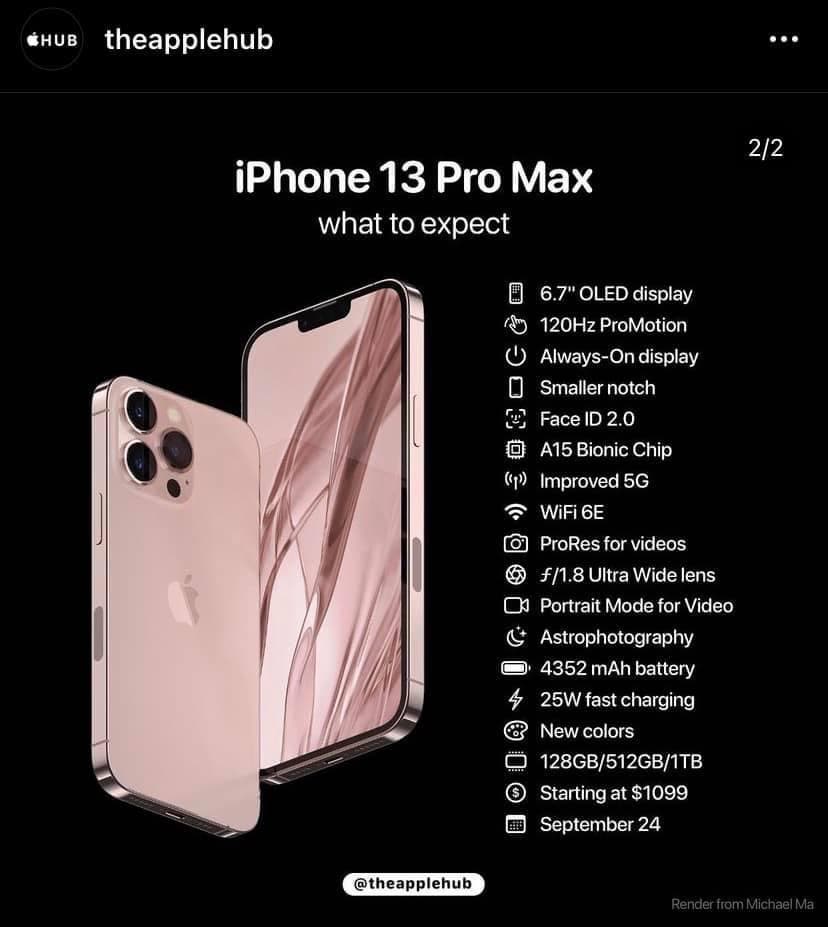 The final and most high-tier model is the 13 Pro Max. This variant has a 6.7-inch OLED display and also packs the 120 Hz ProMotion refresh rate. We assume it’s the only model to go beyond the Full HD mark. For comparison, the last year’s model has a 1284×2778 pixels resolution, and we assume that the 13 Pro Max will stay in this terrain.

Under the hood, the very same Apple A15 Bionic chip. The device also has a Triple-camera setup with Portrait Mode and ProRes for videos, Astrophotography, and more. The new handset will draw its powers from a large 4,352 mAh battery with 25 W fast-charging. It will also debut new colorways.

7 trends in online payments to watch for in ecommerce