Although large-format photography may be an intricate and slow process often shot in a studio, it doesn’t mean that it can’t be taken outdoors with a little ingenuity. Photographer Markus Hofstätter has shared how he modified an ice fishing tent to create the ultimate mobile darkroom so he can shoot and process his work anywhere.

As an experienced collodion wet-plate photographer and educator, Hofstätter has previously shared his best tips and experiences in this type of art where the old practices and equipment meet new technology and methods. He has created tutorials, such as how he repaired a broken Linhof tripod he came in possession of and damaged cameras that simply needed a touch of DIY and 3D printing technology to get them back to full working order, as well as a step-by-step on how to make a ground glass focusing screen at home, among other resources.

In his latest video, Hofstätter revisits mobile darkroom modification — following a previous video from 2019 where he reviewed the dark tent he used at the time — to make it both light tight and easy to set up whilst on location, especially if he is shooting by himself.

Using a portable Eskimo Quickfish tent, which he first tried at the Camera Obscura Festival, Hofstätter realized the tent would give him the exact space he needs for darkroom work both by himself and when working with others and would serve as an upgrade to his current solution. 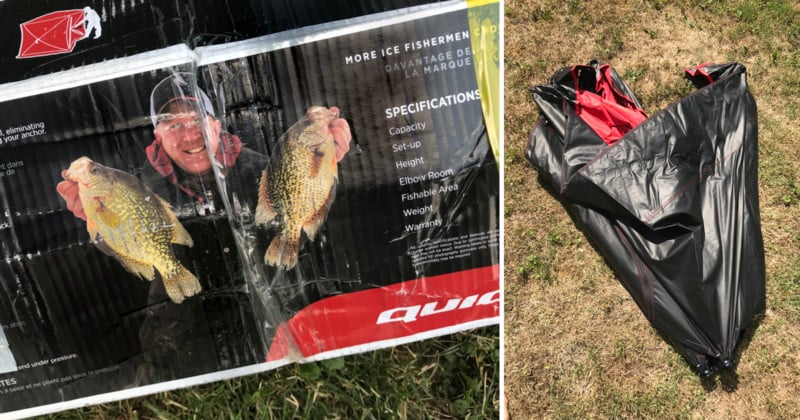 He purchased a refurbished Eskimo Quickfish tent and set out on a mission to find the best option to modify it for his darkroom needs, taking into account other photographers’ suggestions and advice. First, he used a black screenprinting paint mixed with a cold fixer and used it to paint all over any holes and seams inside the tent. The next step was to fix the existing zipper so it would not let any light in. Hofstätter solution involves a permanent cover for the zipper that is similar to the one found on a pair of jeans.

To deal with the tent’s windows, Hofstätter combined red gelatin filters and Velcro which he is able to stack on top of each other in cases where he is in particularly bright locations. To completely black out the tent, he used sheets of pond liner that could also be attached over the windows with Velcro.

Hofstätter also used that same pond liner to cover the floor inside the tent to protect it from any possible chemical spills and to block any humidity that could come up from the ground.

The finished setup uses the modified tent along with other internal additions like a power bank, red light LED, portable table, water canister with a tap, and the appropriate cases to safely transport chemicals. Despite all this, Hofstätter maintains that the setup is still easy to assemble and can be done alone. He says that it is a great solution for photographers who want to travel with ease while still being able to effectively work in the darkroom.

In the video above, Hofstätter shares in detail what kind of equipment he uses inside the tent and why with the hope that others will find it a useful resource to start with. As always, his goal is to share his knowledge and help photographers find the most cost-effective and ergonomic solution to pursue large-format photography.

Image credits: All images by Markus Hofstätter and used with permission.